Kenya/Africities Summit 9: the city of Kisumu hosts the largest meeting of local and regional authorities in Africa

The city of Kisumu in Kenya will host from 17 to 21 May 2022 the 9th edition of the Africities Summit, under the High Patronage of the President of the Republic of Kenya, Mr. Uhuru Kenyatta. The theme chosen for this summit is: "The role of intermediate cities in Africa in the implementation of the United Nations Agenda 2030 and the African Union Agenda 2063". 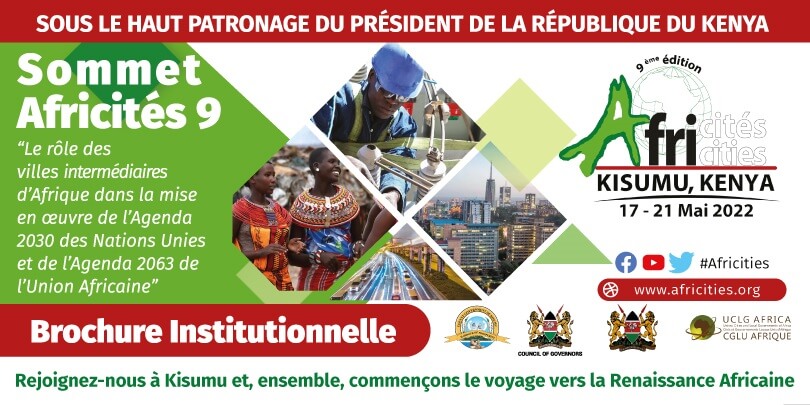 Held every three years over a period of five days, alternating between different regions of Africa, the Africities Summit is the largest democratic gathering on the African continent. This flagship event of United Cities and Local Governments of Africa (UCLG Africa) organized in partnership with the Government of Kenya, the Council of Governors of Kenya (CoG) and the County of Kisumu will for the first time ever be held in an intermediate city.

Kisumu is therefore the place chosen by the community of African local governments to initiate this salutary reflection. This reflection will be addressed during the thematic sessions, the sessions on local policies and strategies, and the open sessions organized during the first three days of the Summit. It will also be at the heart of the debates and proposals of the specific days organized on the major topics that mobilize the attention of the mayors and leaders of the continent's local governments: Climate Day; Diaspora Day; Digital Day; Culture Day; Urban Planning Day; Habitat Day; Women's Day; Youth Day; Africities Investment Forum.

The Africities Summit includes a political segment on the last two days, during which meetings of ministers, mayors and leaders of local governments, regional economic communities, and development partners take place. These meetings will consider the proposals and recommendations of the thematic sessions, the sessions on local policies and strategies, and the open sessions. They will conclude with a tripartite policy dialogue meeting between ministers, mayors and leaders of local authorities and development partners with the aim of defining and adopting a roadmap for the effective implementation of the 2030 Agenda and the 2063 Agenda.

At the same time, the International Trade Fair for Cities and Local Authorities will be held in the same venue as the Summit. The Africities Fair offers institutions, economic operators, academia and research, civil society organizations the opportunity toThe Africities Fair provides an opportunity for institutions, economic operators, the academic and research community, and civil society organizations to showcase their experience, know-how, methods, tools, and products in response to the demands and needs of local authorities for support in implementing their mandates. The Africities Fair also provides an opportunity to organize B2B meetings with local authorities, which may lead to the conclusion of contracts between the protagonists.

The Summit closes with a gala dinner during which the attributes of honorary members will be distributed to the personalities selected by the Executive Committee of UCLG Africa as well as the Africities awards granted to the local governments that have made remarkable achievements that can inspire their counterparts.