The first deputy mayor of Tanguiéta, Bio Kouagou Simba, surrounded by the executive secretary of the National Water Partnership of Benin (PNE-Benin), André Zogo and the head of communication and knowledge management of Global Water Partnership of West Africa (GWP-AO), Sidi Coulibaly, launched on Thursday, during a workshop initiated for this purpose, the second phase of the project "TonFutur TonClimat", implemented through the initiative "Mobilization of youth associations for a better management of water resources in the micro-basin of Tchoutchoubou in the Pendjari basin". 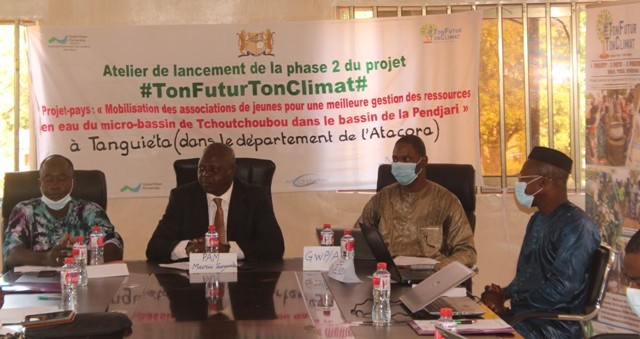 In Benin, the project aims at improving the sustainable management of natural and related resources in the Tchoutchoubou micro-basin in the Pendjari basin, through a strong involvement of young people. The country project is subdivided into two components, namely, the valorization of waste through compost and the restoration of ecosystems and the fight against erosion.

"If we have this second phase of the project, it is because the first phase carried out in the commune of Kouandé was a success.I would like to count on all of us, especially the young people who are at the heart of this second phase of the project, so that the expected results can be achieved so that we can hope for a third phase," said the executive secretary of the National Water Partnership of Benin (PNE-Benin), André Zogo.

The head of the Atacora water department, Eleuthère Batia, expressed the pride of the Ministry of Water and Mines, through its departmental directorate of Atacora, to the technical and financial partners who wanted to direct this project once again in the department. He expressed the hope that this particular attention that Atacora benefits from in the sector will be sustainable.

The first deputy mayor of Tanguiéta, urged the heads of districts and villages located in the Tchoutchoubou micro-basin, local elected officials and youths, to be actively involved in the implementation of the project which, he said, is an opportunity for the whole city of Tanguiéta.

Benin/Promotion of women's leadership at the local level: ANCB presents the content of the PMI-FPL project to the elected officials and technical staff of the Dassa-Zoumè town hall

Vietnam/For a rapid and sustainable development of maritime economic clusters

France/Contests, summer camps for young people... European initiatives around sustainable development are multiplying in the Alps

France/Quiberon - Belle-Ile-en-Mer. Several wine projects are flourishing in the region

France/Survey on mobility in Île-de-France: the region pays you to study your movements