RUSAL/FRIGUIA is once again coming to the aid of the people affected by its activities. The Russian mining giant has offered a financial envelope of one hundred and sixteen million (116,000,000) Guinean francs to 16 villages in Fria to support local development. The official handover of this donation took place this Wednesday, November 23, 2022, in the premises of the prefecture of Fria, in the presence of the prefect of Fria, Colonel Alpha Oumar Cissé, the mayor of the urban commune El hadj Lansana Boffa Camara, the general manager of RUSAL/FRIGUIA Yuriy Kanafotsky and the beneficiaries. 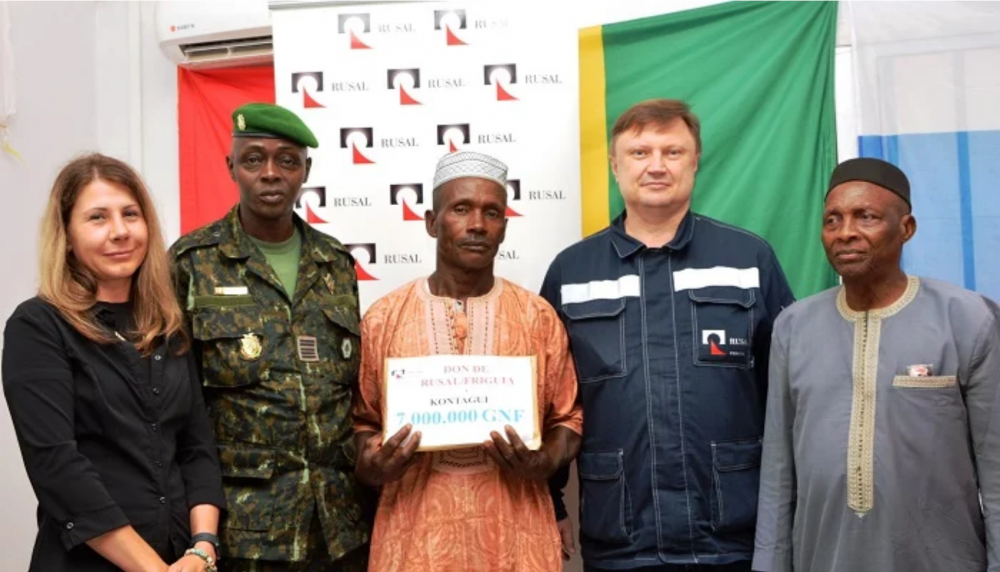 "It is with joy and respect that the councillors of the urban commune of Fria and all the sympathizers greet you and welcome you on the occasion of this ceremony of handing over this financial assistance to the 16 villages of the zone of presence of RUSAL. As you can see, this assistance required from RUSAL/FRIGUIA a lot of wisdom, confidence, but also and above all a lot of commitment for the mission it is invested with, namely the peaceful coexistence between our local populations and the mining operators. Thank you for this. I would also like to thank and congratulate the management of the plant for their involvement in the garbage collection process in the urban commune of Fria. This great achievement undoubtedly strengthens our relationship favorably beneficial, "said the municipal authority.

Speaking, the General Manager of RUSAL/FRIGUIA Yuriy Kanafotsky said that this financial assistance to 16 villages in Fria is part of the program to support the development of infrastructure in areas where RUSAL is present. It is, he said, a charitable action that aims to promote a climate of peace and harmony in the areas where the company operates.

"The funds granted today by RUSAL are a gesture of goodwill on the part of the company to develop the region. I would like to emphasize that this action is a charitable initiative of the company beyond the obligations that RUSAL, as a responsible investor, fully respects. What is happening today is another step towards strengthening the atmosphere of social peace and harmony between the closest neighbors," said Yuriy Kanafotsky, who spoke on behalf of the head of RUSAL representation in Guinea, Alexander LARIONOV.

The general manager of RUSAL/FRIGUIA reminded that in previous years, the mining company had provided assistance to the elders of the villages in its area of presence. For him, beyond these gestures of goodwill, the FRIGUIA plant, rehabilitated in 2018 at a cost of more than 125 million dollars, is today a source of stability and well-being for the inhabitants of Fria and the entire region. 1400 people are currently employed there and another 2500 work on behalf of subcontracting companies.

The Prefect of Fria, who presided over the ceremony, thanked RUSAL/FRIGUIA for all it does for the communities impacted by its activities. "This is a very significant ceremony for me. This gesture goes straight to my heart. And, on behalf of the beneficiary localities, on behalf of the population of Fria, on behalf of the President of the Republic, Colonel Mamadi Doumbouya, Supreme Chief of the Armed Forces, on behalf of all the people of Guinea, we say thank you to the company RUSAL. We thank you for this gesture which is not the first one but which has become a tradition in Fria. We ask you to continue to assist these populations who are in need and who are impacted by the presence of RUSAL in their respective localities", requested Colonel Alpha Oumar Cissé, prefect of Fria.

For his part, Mohamed Conté, president of the consultation committee of the mining localities of Fria, spoke on behalf of the beneficiary populations on the occasion of this ceremony. He expressed their satisfaction and gratitude to RUSAL/FRIGUIA, while promising that they will ensure that peace and understanding reign between them and the company.

"It is with complete satisfaction that we receive these funds from RUSAL/FRIGUIA. You know that happiness is endless because the needs are endless. Otherwise this company has always thought of the community of Fria. It listens and hears the cries of heart of the populations. It has always helped in local development, it has always assisted the people of Fria. We thank them for their help. In our turn, we will do everything to preserve peace and cohesion between the society and the people. Because the company can not evolve if there is no peace and cohesion between it and the local populations of its area of presence, "said the spokesman of the beneficiaries.

It should be recalled that the charitable projects of RUSAL in Guinea are not limited to the Prefecture of Fria. For many years, RUSAL has made a significant contribution to the training of Guinean specialists by offering scholarships to young Guineans for training in Russian universities. In 2011, 100 Guinean students, including several from Fria, received RUSAL scholarships to study at Russian universities. In 2017, this program was fully completed, and in 2018, RUSAL announced a new enrollment of students in the "RUSAL Scholarship 2018" program. According to the results of the competition, 101 winners were selected from among the representatives of the talented youth of Guinea. Now these young people are completing their studies in Russia. And in May of the year 2022, a new enrollment of students was announced under the program "RUSAL 2022 Scholarship". The implementation of the program "RUSAL 2022 Scholarship" will allow to train highly qualified Guinean doctors: general practitioners, surgeons, cardiologists, as well as nurses and laboratory specialists. In total, since 2011, RUSAL has allocated more than 15 million dollars for the implementation of scholarship programs for Guinean students.