Minepat, AFD and the Ambre Group have just signed a partnership agreement with the Fonds d'études et d'expertise technique for a prospective study on agricultural ecosystems and the development of rural areas in Cameroon. 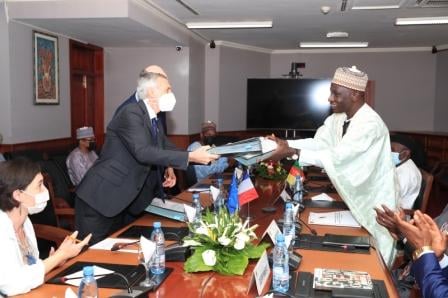 On Friday, November 19, the tripartite partnership agreement between the Ministry of Economy, Planning and Land Management (Minepat), the French Development Agency (AFD) and the Ambre Conseil Initiative France group was signed. This for the realization of a prospective study on agricultural ecosystems and the development of rural territories in Cameroon, to the tune of 200,000 euros, or about 131 million CFA francs.

The ceremony was attended by the Minister of Livestock, Fisheries and Animal Industry, Dr. Taiga, the French Ambassador to Cameroon, Christophe Guilhou. According to the head of French diplomacy in Cameroon, "this tripartite agreement should allow the realization of the study (conducted by Ambre Conseil and Initiative France editor's note), which is expected to propose a vision on the evolution of the agricultural and agri-food sector oriented on the increase of the productivity of the sector.The study (carried out by Ambre Conseil and Initiative France, editor's note) is expected to propose a vision of the evolution of the agricultural and agri-food sector, focused on increasing the productivity of agricultural sectors, and to make operational proposals for synergies of action based on existing services and with a vision centered on the actors, innovations and their constraints," Christophe Guilhou said. We learn from the services of Minepat that three programs funded by the resources of the Contract of Debt Reduction and Development (C2D) are mainly concerned by the study namely: AFOP (Programme d'Appui à la Rénovation et au Développement de la Formation Professionnelle dans les secteurs de l'élevage et de la pêche), ACEFA (Programme dACEFA (Programme d'Amélioration de la Compétitivité des Exploitations Familiales Agropastorales) and TRANSFAGRI (Programme Intégré de Valorisation et de Transformation des Productions Agricoles).

For the Minister of Economy, Alamine Ousmame Mey, this study is expected to "propose a prospective vision of the evolution of the agricultural and agri-food sector as a result of the effect of increasing the productivity of agricultural sectors, as well as operational proposals for synergies of actions," says his office. Alamine Ousmane Mey then seized the opportunity to congratulate the support of France in the agricultural sector, from the C2D whose overall envelope would eventually invest more than CFAF 1,000 billion in the economy of Cameroon, with more than 200 billion CFAF already invested in the rural development sector. Let us indicate that with its cancellation to the participation in the moratorium of suspension of the service of the external debt of the developing countries, Cameroon should benefit from an envelope of 77,6 billion coming from the C2D in 2022.

Note that the Fund of Studies and Technical Expertise (FEXTE), is a financing tool proposed by two French ministries, including the Ministry of Finance, and the Ministry of Europe and Foreign Affairs.