Thursday, November 25, 2021 in Hinche (Dept. Du Centre) as part of the celebration of the World Day against Violence against Women, Sofia Loréus, the Minister of Women's Affairs and Women's Rights proceeded to the launch of 16 days of activism around the theme "vyolans sou Fanm se lènmi lasosyete, nap denonsel." 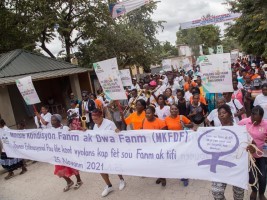 Many personalities took part in this great event, including the Acting Agent of the city of Hinche; Ms. Mideline Midlove ADRIEN, the Departmental Coordinator of the Ministry in Hinche Ms. Jesula MEZARD ; The Departmental Delegate, Bidry CORIOLAN; the Government Commissioner of Hinche, Mrs. Dieunise BENJAMIN ALEXANDRE; the Government Prosecutor of the Court of Appeal of Hinche, Mrs. M. BORDEAUs of the Hinche Court of Appeal, Ortella PRUDENT; the Chief Commissioner of Mirebalais CP Kerby LOUIS; the Divisional Inspector in charge of gender-based violence, Marie Ronide FONTAINE; the representative of UN-Women in Haiti, Mrs. Dédé EKOUE, the Project Manager of BEST USAID, Wilna CADET, among others.

In addition, the men who participated in this day all solemnly swore to respect the rights of women and not to exercise any form of violence and discrimination against them, a very moving moment for all women.

At the end of the ceremony, a performance by the famous Haitian artist, Jean Jean Roosevelt, who sang the emancipation of Haitian women, filled the audience.