Within the framework of the European week of waste reduction, the community of the communes of the South-Corsica organizes various actions to sensitize the inhabitants of the area to the importance of sorting. 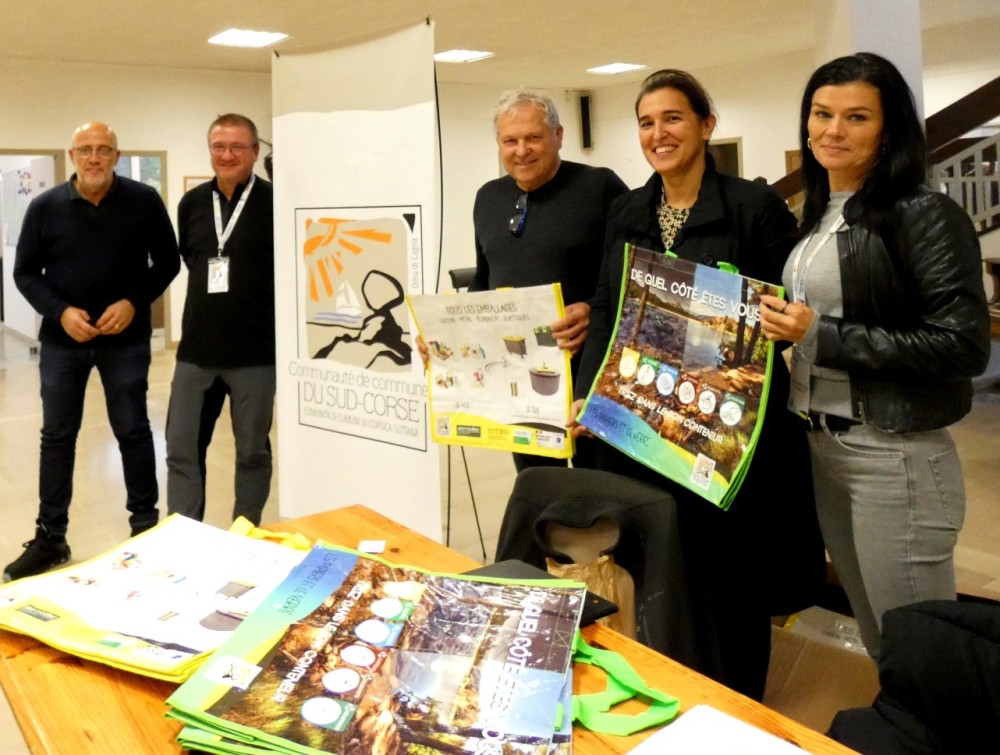 Among these, the free distribution of pre-collection bags to help sort and transport the various household waste to the voluntary disposal points. On Tuesday morning, many people already came to get their two reusable bags at the town hall of Lecci: the first one, compartmentalized to collect newspapers, magazines and glass and the second one intended to collect packaging.

All throughout the weekIn addition, all the inhabitants of the intermunicipality will be able to collect their bags directly from their commune.

A simple tool, thought to facilitate the sorting in the everyday life. "The sorting instructions are simplified so that this gesture is systematized and becomes a reflex. Our priority is to inform the inhabitants about the importance of sorting their household waste because the volumes of waste are then complicated to manage. And when we explain to people that what is not sorted is buried, they change their behaviour", explains Laurence Giraschi, director general of services (DGS) of the community of communes of South Corsica. "For our part, we continue to work on improving the equipment, particularly through the change of sorting columns and the installation of semi-buried containers and also by allowing everyone to have easy access to them. We already realize that people are playing the game and it is by equipping the territory even better that we will succeed."

For Georges Gianni, president of Syvadec and vice-president of the intermunicipality in charge of waste, "sorting is a civic gesture and logical to counter the problems of landfills. Even if the sorting figures are increasing, some people still find it difficult to adhere to them and indeed, this year's exceptional tourist season has led to an increase in landfill".

"Beyond the locals, we must encourage visitors to participate in these actions," says Laurence Giraschi.

To continue to make the inhabitants aware of this issue, training sessions will also be held throughout the week, especially for children. This is in addition to Syvadec's Ecoscola program, which teaches the youngest children the right gestures directly at school, but also encourages schools to recycle with collection bins and collectors installed in the classrooms.

Not forgetting the return of compost from the shared composters in Monacia d'Aullène and the HLM in Figari. "Many people have played the game by using these composters and we have also distributed nearly four hundred individual composters this year. Two new composting sites will soon be installed in the village of Figari and at the Horizon Bleu residence in Porto-Vecchio", explains Xavier Benedetti, in charge of the sorting ambassadors and waste referent at the intermunicipality.

And for the most recalcitrant who throw their waste in the nature, the territory will soon be equipped with mobile cameras. For those caught red-handed, the penalty will be a €1,500 fine, plus €1,000 per tonne thrown away.