From October 11 to 15, 2021, the Rector of the AUF, Prof. Slim KHALBOUS, carried out a mission in Ivory Coast placed under the sign of the reinforcement of the presence of the AUF in the country. He inaugurated the 1st Centre of Francophone Employability (CEF) in Côte d'Ivoire in Abidjan and launched the installation of a national office of the AUF in the same city. This mission was punctuated by a series of meetings with various partners from the academic, political and economic worlds. 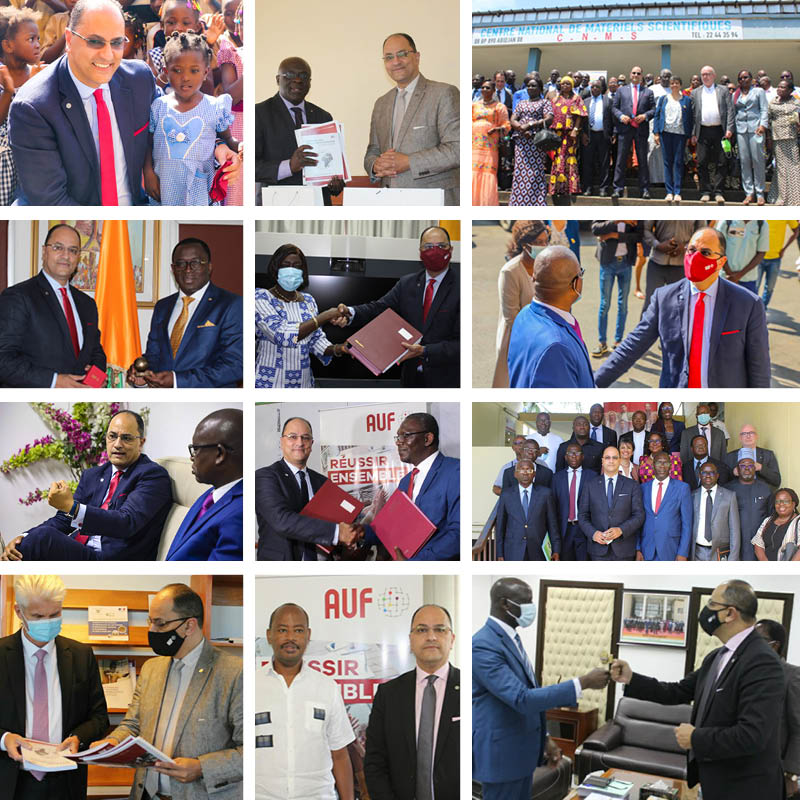 The Rector of the AUF was received by Mr. Amadou COULIBALY, Minister of Communication, Media and Francophonie, Spokesman of the Government. They exchanged on the coordination of the actors of the Francophonie as well as on the projects of the AUF in Côte d'Ivoire in particular the opening of the1st Center ofEmployability Francophone inaugurated the same day in Abidjan and the establishment of a National Office of the AUF hosted by the École Normale Supérieure.

The Rector was received by the Ambassador of France in Côte d'Ivoire, Mr. Jean-Christophe BELLIARD. They exchanged on the tracks of collaboration between the French companies present in Côte d'Ivoire and the Francophone Employability Centre of Abidjan.

He also met the Executive Secretary of the Association for the Development of Education in Africa (ADEA), Mr. Albert NSENGIYUMVA. Three areas of collaboration were discussed during this meeting: higher education, guidance systems and digital education.

Mr. Khalbous participated with the Minister of Higher Education and Scientific Research, Professor Adama Diawara, in the steering committee of the Virtual University of Côte d'Ivoire(UVCI), a project in which the AUF is involved for many years.

The Rector of the AUF discussed with the Minister of Higher Education on the prospects of collaboration around the new Francophone Employability Centres in the country and the modalities of setting up a student-entrepreneur status in Côte d'Ivoire.

Prof. Slim KHALBOUS also visited the Centre for the Promotion of Investments in Côte d'Ivoire (CEPECI) and the Chamber of Commerce and Industry of Abidjan. The Rector of the AUF exchanged with the persons in charge of these two structures on the contents of training of the Centre of Francophone Employability of Abidjan and the prospects of collaboration. For Mr. KHALBOUS "the success of the Francophone Employability Centres is based on the adhesion and the collaboration with the companies".

Following these visits, the Rector of the AUF went to the headquarters of the French Development Agency (AFD). During their meeting, the Rector of the AUF and the Director of the AFD in Côte d'Ivoire took stock of their collaboration on large-scale projects such asIFADEM(Initiative francophone pour la formation à distance des maîtres) and APPRENDENT.APPRENDRE(Support for the professionalization of teaching practices and the development of resources) and exchanged views on the prospects for collaboration in the field of youth employability.

The Minister of National Education and Literacy, Mrs. Mariétou KONE and the Rector of the AUF proceeded to the signature of the convention on the implementation of a hybrid device which will allow the Ministry of Education and Literacy toThe Rector of the AUF signed a convention on the setting up of a hybrid system which will allow the Ministry to reinforce the piloting of the distance training of teachers of scientific subjects in secondary schools.

The AUF Rector then took part in the closing ceremony of the IFADEM-PAPDES national committee before being received by the Minister of Sports Promotion and Development of the Sports Economy, Mr. Pauline Claude DANHO.

Finally, Prof. Slim KHALBOUS visited the premises of the Virtual University of Côte d'Ivoire where he exchanged with the faculty and students.