The collapse of the pound should have facilitated a transition to an export economy and boosted local production. However, the statistics show that the opposite has happened. 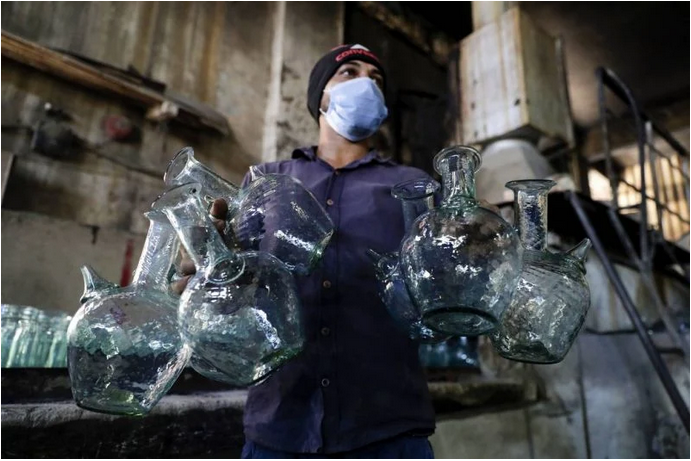 Like Hassane Diab's government before it, the new executive led by Nagib Mikati called in its ministerial declaration for a transition from a "rentier" economy to a "productive economy" to achieve social justice. Since the beginning of the economic crisis two years ago, calls from outside the government have been encouraging the construction of a productive economy, while members of the ruling parties have been trying to make political hay out of it.

In theory, the collapse of the national currency should have facilitated a transition to an export economy and more locally produced goods for the Lebanese market. "Normally, you would expect a real depreciation of the exchange rate to help you export more," says Nasser Saidi, former minister of economy and industry. "It's part of the adjustment process when you experience an exchange rate depreciation: it makes imports more expensive but it also helps you export."

High energy costs, the need to import most raw materials, lack of credit and strained relations with customers in the Gulf countries have all taken their toll on Lebanese industry.

An economy based on imports

Lebanon's post-civil war economy was essentially based on the banking and land sectors. High interest rates crowded out investment in productive enterprises and the balance of payments became extremely skewed. In 2018, Lebanon imported $19.9 billion worth of goods, while exporting only $2.9 billion, totaling a trade deficit of $17 billion. The result was a glaring trade deficit and a scramble for more and more US dollars to finance imports, helping to set the stage for the economic crisis.

Lebanese consumers have been left extremely vulnerable to the depreciation of the currency as many goods are either imported or produced locally with imported materials, the price of which is very high.The depreciation has made products more expensive than those produced locally, and the price of these products is indexed to the dollar rather than to the national currency, while most salaries in Lebanon continue to be denominated in Lebanese pounds.

But apart from producing the bare necessities, the shift from imported to domestic products has had a rather paralyzing effect in Lebanon, says Paul Abi Nasr, CEO of Polytextile and board member of the Association of Lebanese Industrialists (AIL). "With the total collapse of people's purchasing power, even if your products are cheaper than what is imported, they remain inaccessible to a large part of the population," he explains.

At the same time, about 60% of Lebanese manufacturers sell at least part of their products abroad, according to Ziad Bekdache, vice-president of the AIL, and thus receive fresh money.This brings in new money (cash or foreign currency transferred from abroad) while generally paying their workers in Lebanese pounds. A cost-cutting strategy that could, in theory, encourage more production and more jobs even if local demand is low.

However, the industrialists' advantage in terms of lower wages has been undermined by rising energy costs. Manufacturers who manufacture for export say that savings on labour costs are not worth the soaring cost of electricity, which they now have to produce mainly themselves via generators, powered by electricity.They now have to produce most of it themselves via generators, fuelled by imported fuel oil paid at the parallel exchange rate, valued yesterday at just over 19,000 pounds a dollar, against an official parity that remains at 1,507.5 pounds to the greenback.

Before the fuel crisis worsened this year, cheap subsidised energy was one of their main advantages, even if it came at the expense of the country's economy.Even if it was at the expense of Électricité du Liban (EDL), which charged users below the cost of producing energy. Bekdache says that industrialists are paying about five times more for electricity than before. The smallest factories now consume 10 tonnes of fuel oil per month, he estimates, while the largest can consume up to 600 tonnes. Industrialists who consume fuel oil have been able to buy it in dollars at market prices since late August.

Exporters may have had some opportunity when the currency started to lose value in late 2019, and before the energy crisis worsened significantly in 2021, says Paul Abi Nasr, but Covid-19 has almost halted international trade, rendering that opportunity obsolete. In addition to energy costs, the AIL vice-president says that 25-60% of the sector's expenditure is on imported raw materials, which must be paid for in dollars. In the past, Paul Abi Nasr had estimated this cost share at 30%.