The Day of Associations of Friendship and Solidarity with Vietnam in France was organized on September 24 in Malakoff, a suburb of Paris. This is the 3rd edition, organized by the Embassy of Vietnam in France with the ambition to strengthen the links with associations, mass organizations in France that have activities of solidarity and friendship with Vietnam, and at the same time relaunch the associative activities after a period interrupted due to the impact of the Covid-19 epidemic. 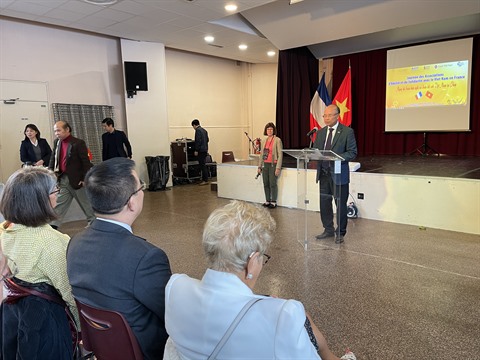 The event attracted the participation of about twenty Vietnamese, French and Franco-Vietnamese associations from many provinces and cities of France, as well as a large number of Vietnamese students who studied in France, and friends of Vietnam. In particular, we note the presence of a delegation of the Union of Vietnamese Friendship Organizations (VUFO) and of the Association of Friendship and Cooperation Vietnam - France led by Mr. Nguyen Van Doanh. Nguyen Van Doanh, Vice President of VUFO, coming from Vietnam to attend the event.

In spite of the capricious weather, since early in the morning, representatives of associations were present to decorate and display their stands. From traditional ao dai to culinary specialties, from posters and brochures presenting the activities of the associations, to souvenir items for sale to raise funds for charity, all creating a festival of sound and image, a very intimate and supportive atmosphere in the village hall of Malakoff.

Speaking at the opening ceremony, Vietnam's ambassador to France Dinh Toàn Thang emphasized the role of associations of solidarity and friendship with Vietnam in the national liberation struggle of yesteryear and national development today. According to the ambassador, these organizations are both "the foundation and the pillar of the friendly relationship between Vietnam and France", helping the two countries to come closer in terms of social and human values, and to build strong ties generating all areas of cooperation, namely political, economic, scientific and cultural.

Sharing the reason for choosing Malakoff for this3rd edition, Ambassador Dinh Toan Thang said that the choice of Malakoff "is not trivial". In fact, this city has a tradition of solidarity with Vietnam, cultivated by Leo Figuerres, mayor of Malakoff for thirty years (1965-1996) and author of a book entitled Je reviendrai du Vietnam libre (I will return from free Vietnam ) to demand the end of colonial wars and the return of peace in this small country. "By gathering today in Malakoff, all the associations of friendship and solidarity with Vietnam with Vietnam in France, I would like to reaffirm that we keep in mind all the French figures who, like Léo Figuèrres, have been held by our side against the war, to promote peace; and also express how much we hold in high esteem all the efforts made by the municipalities and their associations that have shared with Vietnam the common values of peace and solidarity," he said.

For her part, the mayor of Malakoff, Jacqueline Belhomme, said she was "very happy" to host this event again in her city. "The friendship between Vietnam and Malakoff is rooted in our collective history. It is the fruit of Malakoff's historical commitment to the culture of peace, to solidarity, to the freedom of peoples to self-determination", she insisted, citing Léo Figuères as a "willing and enthusiastic artisan". Delighted to continue this path that weaves links, promotes encounters, the mayor of Malakoff, she said that "it is through these exchanges, through the sharing of culture and values that we build the tools to make society together, from local to international. "In this respect, the vitality of Vietnamese associations that we see today is good news. You will always be welcome in Malakoff!" she confirmed.

A day full of activities

Sharing the role of VUFO, he said that as a central force of people-to-people diplomacy, VUFO is actively renovating the content and mode of operation to promote the pioneering role of foreign affairs in Vietnam.the pioneering role of foreign affairs in creating a peaceful and stable environment, while mobilizing external resources to develop the country and strengthen its position and prestige in the world. "Today's Vietnam Solidarity and Friendship Day is one of the key activities of VUFO and the Vietnam-France Friendship and Cooperation Association in our efforts to promote the development of Vietnam.France in our efforts to make a good bridge, connecting the Vietnamese people with international friends and partners with the common goal of peace, cooperation and sustainable development", he stressed.

On this occasion, the vice president of VUFO and the Vietnamese ambassador to France awarded medals and satisfactions to a number of people and organizations with typical contributions to friendship and solidarity activities with Vietnam. The delegates also inaugurated the photo exhibition on VUFO's people's diplomacy.

Within the framework of the3rd Day of Friendship and Solidarity Associations with Vietnam, two seminars with the theme "Health, education and cultural exchange as the basis of friendship and solidarity between France and Vietnam" and and "Cooperation and solidarity between France and Vietnam in the face of new challenges of climate change and sustainable development" led by university lecturers, attracted the attention of a large number of listeners.

The musical documentary film "Once upon a bridge in Vietnam" by the young Franco-Vietnamese director François Bibonne, which tells the story of his journey to find his grandmother's roots and the author's love for this distant country, left strong emotions in the hearts of the audience.

In addition, the performances of traditional martial arts Vovinam, dances and songs gave the participants of the festival beautiful impressions./.