What do diasporas bring to their host country and especially to their country of origin? To answer this question, several guests have contributed their insights. This time, your online information portal www.jumelages-partenariats.com has set course for Mozambique to gather the contribution of Ana Elisa de Santana Afonso. She is the Director of UNESCO's multisectoral regional office for Africa and proposes avenues for an in-depth study aimed at clarifying the notion of the "Mozambican diaspora", insisting on its categorization due to the country's very eventful history. 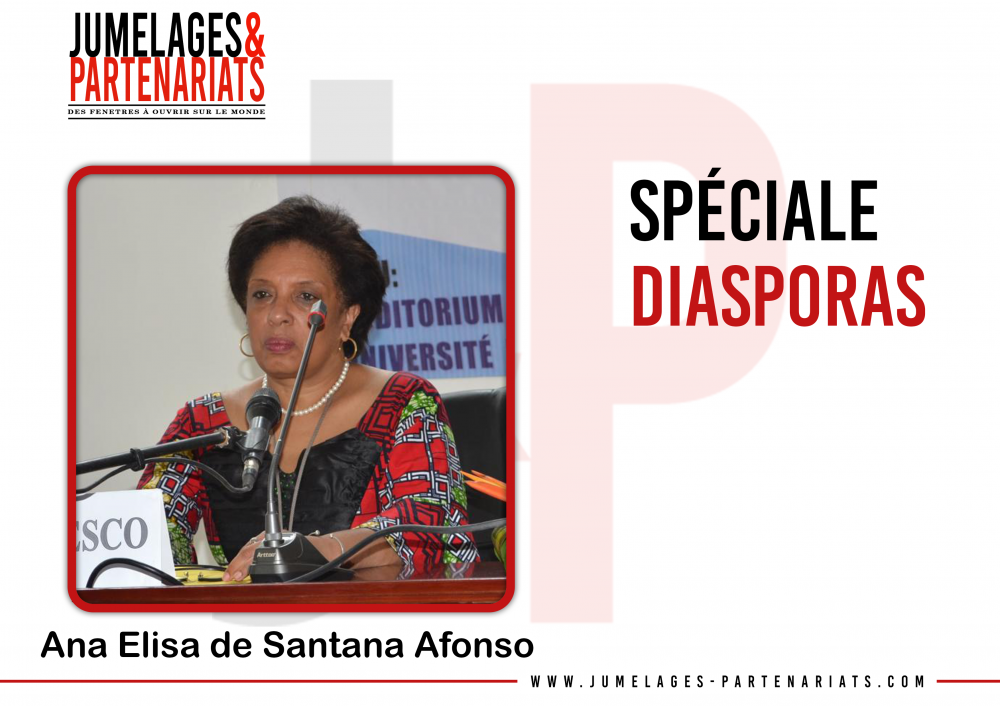 In the configuration of the Mozambican diaspora, it is important to take into account geographical, historical, economic and political factors throughout the history of movements of peoples and individuals from the Mozambican territory. However, it must be stressed that the concept of Mozambican diaspora is not yet clearly stated, given the state of the study and the absence of a national policy on migration. Thus, the concept of Mozambican diaspora is associated or synonymous with migrants and is integrated in the framework of demographic studies on population, but also international relations. During the cycle of conferences on the Mozambican Diaspora organized by INACE, during the month of September 2021, only people of Mozambican nationality who reside outside the country and registered in the country's consulates abroad, seem to be part of the diaspora.

The formation of the Mozambican Diaspora

Located on the eastern coast of Africa, which is about 2.700 km, Mozambique is one of the countries whose borders, as defined by the Berlin Conference (1885), were drawn on a vertical line, in contrast to the rest of the world.The borders of Mozambique are drawn on a vertical line, unlike those of most African countries, which are drawn on a horizontal axis, from the coast to the interior. This geographical position of Mozambique means that only three of its twelve provinces are not coastal and that a large number of its ethno-linguistic groups inhabit these areas. This has favoured contact between these populations and the peoples who sailed the Indian Ocean, creating mixed peoples, languages and cultures, such as Swahili. The settlement of the Indian Ocean Islands is an example of the presence of people of Mozambican origin, as well as outside the continent, in Asia and in the Arabian Peninsula.

Given the violent process of decolonization in most of the former Portuguese colonies, one must also consider the forced displacement of Mozambican populations to neighbouring countries and elsewhere for political reasons. In addition, the precarious and discriminatory education system has begun to send students from an "assimilated" class to school.In addition, the precarious and discriminatory education system has started sending students from an "assimilated" class to the former metropolis to attend colleges, high schools and universities. Although numerically small, these students became part of the diaspora formed by nationals of other African countries with an official Portuguese language (PALOP), gathered around the "Casa de Estudantes do Império", a civil society association which, during the Salazarist era, was one of the nuclei of resistance to the dictatorship and was active in the emergence of nationalism. Despite the resistance to colonization within the country, national consciousness was developed within this educated diaspora. This was reflected in literary, artistic and ideological production, marked by the desire to return to the country of origin, which thus demonstrated the participation of the diaspora in its liberation. These migrants were responsible for the formation of non-racialized political movements in the underground that brought their members together on the basis of their common Mozambican origins.

After independence, Mozambique was one of the African countries that belonged to the Socialist Bloc and established cooperative relations with them. Among the measures taken by the country's first government, it is worth highlighting the agreements for the migration of workers to the former GDR, or of teenagers and young people to study outside the country, such as in Cuba and other communist countries of Eastern Europe.

Mozambique is also one of the coastal countries hit by climate change, which causes natural disasters of all kinds:floods, drought, cyclones and resulting in the departure of thousands of individuals and families, including women, outside the borders in an extremely vulnerable health situation.

Without wishing to paint a gloomy picture of these forced migratory movements, we must also take into consideration in the characterization of this diaspora, the more recent movements of the populations of northern Mozambique, victims of the terrorism raging in the continent and in particular, on the East African coast.

Definition of the Mozambican Diaspora in question

In the former Portuguese colonies, nation building was done through armed national liberation struggles which created refugee communities in the border countries. Moreover, like the social and economic services independent of the host states and similar to those created in the liberated zones (Zonas Libertadas), these diaspora communities have been able to develop their own social and economic services.s of the Diaspora have developed civic education practices that have become a pilot experience for the country, both for the development of patriotism and for national unity. The Mozambican Diaspora was presented as an example of patriotism, and the veterans as nation builders and necessary for the recruitment of high ranking government officials.

At independence, the new government did not adopt dual nationality and opted to expel those who had renounced Mozambican nationality. Many people born in Mozambique with Mozambican ancestors, without any ties to Portugal, found themselves in the 1970s in the former metropolis in precarious humanitarian conditions. They ended up settling in this country or emigrating to other European countries, thus giving birth to generations of people of Mozambican origin, of Portuguese or other nationalities, but always with a link to Mozambique. These people, a majority of whom lived in ethnicized neighbourhoods and in the suburbs of large cities, were generally hostile to the Mozambican state in the first decades after independence. However, they maintained links with their families, their communities, and the country. They were a support for the migration network from Mozambique to Portugal and some other European countries such as Italy, Sweden, the United Kingdom, among others.

The socio-economic impact of these migrants, as well as the generations born outside Mozambique, is as important for the host country as for the country of origin. This characterization could facilitate the implementation of strategies for the integration of this population in the host country and the strengthening of cooperation and development links between Mozambique and the countries where this population is settled.

The question of return to the country, whether real or merely envisaged, temporary or permanent, for tourist or economic purposes, is one of the essential features that defines the diaspora. The use of social networks and the internet is crucial in the constitution of a diaspora because they feed migratory chains, support migration paths and projects while consolidating links with Mozambique. These groups are a relay in the construction of the country's image, the promotion of ecological, cultural and memory tourism. They can also contribute to the promotion of investment, humanitarian assistance and community development.

Proposal for the study of the Mozambican Diaspora

Without having the pretension of a historian, nor wanting to limit the history of the Mozambican diaspora to the period of colonization, it would be possible to make a categorization for the study of the Mozambican diaspora that takes into account the following criteria: the establishment of Mozambique's current borders; the constitution of the Mozambican state; the conception of African diaspora underlying Pan-Africanism, including its unitary and homogeneous vision; the insertion of diaspora policies within the framework of population, migration, cooperation and inclusion policies.

Indeed, the African diaspora endogenous to the continent deals with the migrations of Bantu peoples on an ethno-linguistic basis and participates in the populating of Africa. It is linked to the history of the great empires in Southern Africa and its relations with the rest of the world, and covers the period up to the demarcation of the borders of the current African Union States. This is an important phase in the formation of African citizenship and Mozambicanity. On the other hand, the African diaspora exogenous to the continent covers the period of the Transatlantic, Trans-Indian and Trans-Saharan slave trade. Mozambique is essential for the settlement of the Indian Ocean Islands, especially by the Makoua-Lomwe peoples. Recent studies on the African presence in India, Ancient Persia, Iran and the Middle East are a challenge to Mozambique's presence in the World.

Also, the voluntary and forced regional diaspora is mostly male migrant workers, non-specialists, working in the mining and agricultural sectors. It is a diaspora linked to the international division of labour and in the context of the dependence of the economy of colonial Mozambique. It is important to characterize the generations born in the host countries, and to better understand what links them to their Mozambican origins as well as the relations they maintain with the communities of origin. As forthe nationalist Mozambican diaspora , they emigrate for political reasons related to colonization or are students. They form communities of Mozambicans in neighbouring countries. Those who go outside the continent generally have a secondary education or go to continue their studies. The Mozambican community in Portugal establishes close relations with nationals of other former colonies, thus constituting a Portuguese-speaking diaspora of PALOPs.

Finally, the post-independence Mozambican diaspora, the first wave of migrants, is linked to the decolonization process and is made up of people who have renounced their Mozambican nationality. This was followed by other migrant workers who left the country as part of the socialist planning economy, or young students who lived abroad to study due to the weakness of the education system. Back home, they have created communities of former migrants. The civil war forced many Mozambicans to move as refugees to Africa. The communities that have settled in the countries of the region are marked by the conflict. We must also take into account the climate refugees and terrorism, of which Mozambique is unfortunately one of the examples in Africa.