Faced with increasing food insecurity, farmers in the northern region, particularly in the province of Passoré, have found an alternative solution in this innovation, through the development of this local variety of sorghum, "Boukayamdé", which hides shame in the local language. This variety of sorghum, which is very early and very profitable in terms of production, is a shield against hunger. In Yargo in the commune of Kirsi, farmers have been cultivating it for three winter seasons. Immersion in some fields in Yargo! 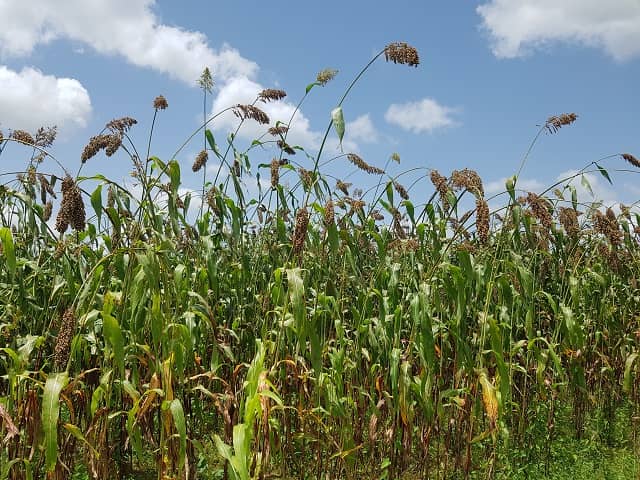 In her field located in the northern region of Burkina Faso, in the village of Yargo, commune of Kirsi in Passoré, Mariam Raabo, this farmer, proudly standing next to her "Boukayamdé" field, does not hide her emotions.Mariam Raabo, a farmer, standing proudly next to her field of "Boukayamdé", does not hide her emotions. She is a happy mother who praises the merits of this variety of sorghum that she has been growing for three years. The variety has won over most of the local farmers and Saïdou Gueda is even more delighted. He is one of the producers of Boukayamdé de Yargo.

For this polygamist and father of seven children, who is in his forties, the joy is immense. Feeling the ears of his crops, the farmer speaks of a deliverance. "It has put an end to our hunger, because during the winter period, all the granaries are empty. There is no more food and for a big family like us, it is very difficult. But when we had this variety, it was like a relief. Now you can see for yourselves," he says, his right arm outstretched towards the sorghum ears as if to show the results of his work. And he concludes: "Something that the eye can see, you don't have to go and consult a soothsayer.

In the middle of the fields as far as the eye can see, the Boukayamdé stands proudly with its seeds. In this village of Yargo, with a population of a few hundred, most of the producers of the variety are busy starting their harvest.
On the morning of September 24, 2022, while some farmers smell the meat on the ovens traditionally installed at the village market, Boulkon (Arbollé department), the producers of Boukayamdé are making the rounds under a blazing sun in their fields. Mature sorghum ears, along the fields, are admired for the beauty of their production.

As the name suggests, this sorghum has really hidden our shame," says the head of the women's group in Yargo, her eyes sparkling with satisfaction. It is very fast and profitable to grow, and its tô is very good. If it weren't for this sorghum at this time of year, we would have nothing to eat. We are almost 40 people in the same courtyard and we eat in one pot. If it wasn't for this cereal, we wouldn't be able to get by," she acknowledged.

Boukayamdé" is a local sorghum variety cultivated because of its earliness and high yield potential. "It is a variety used to alleviate hunger during the winter season because it is quite fast and very efficient in terms of yield. Generally, in rural areas, the winter season is very difficult, because the granaries have been emptied, so Boukayamdé allows farmers to have food before they reach maturity.So Boukayamdé allows farmers to have something to eat before the ripening of long period varieties," says Jacob Béré, the Kirsi agricultural officer.

For the record, it is a local variety that was used by an old man in the area at the beginning and was identified for experimentation by farmers. This was done within the framework of a project that worked with producers to identify local innovations and to document endogenous knowledge and then promote it among farmers. This has allowed the variety to spread in the space of only two years.

In a context of food insecurity due to poor winter seasons caused by low rainfall and the scarcity of cultivable land, having such a variety of cereal is a considerable asset for farmers. Especially since the land, according to the agricultural officer, is getting poorer by the day and if we have these types of varieties that allow farmers to have a good yield and meet their food needs, it is to be encouraged.

For the researcher of the Institute of Environment and Agricultural Research (INERA), Professor Hamadé Sigué, the Boukayamdé is an early variety that has an advantage not only for its earliness and productivity. The variety gives a good yield which shows its interest for the producers. Its yield is around 800 to 900 kilograms per hectare, or even more.

These advantages are enormous, because there is a potential in relation to the yield and even at an average rainfall, it varies between 800 and 900 per hectare. Its cycle is short and its adaptation to the locality in spite of the poor quality of the soils, Boukayamdé behaves better", according to him. These two qualities make it advisable for farmers, he says, because it can be an alternative against food insecurity, especially in the arid or semi-arid areas of the Sahel and the North.

The advantages of this variety, according to the INERA researcher, are that it is resistant to drying out and to the effects of the sun.It is also drought resistant and adapts to all types of soil, making it an ally for arid regions such as the North and the Sahel. "With Boukayamdé, it is only necessary to have a rainfall around 400 to 500 cubic millimeters, yet with some varieties and the same rainfall it will not work," he added.

Despite its potential, the variety is little known to Burkina Faso farmers, but research has already been conducted on the subject. According to the INERA researcher, as part of the development of certain local varieties conducted at the Saria research station, Boukayamdé is one of the varieties that have already been selected and purified and can be used by farmers.

We left the village as the sun was setting, leaving the Boukayamdé producers in fits of laughter. Laughter that we hope will be transmitted to other villages one day if the variety is popularized.