The Khombole town hall handed over a batch of school kits and more than 300 tables-benches to the seven public elementary schools of the commune. 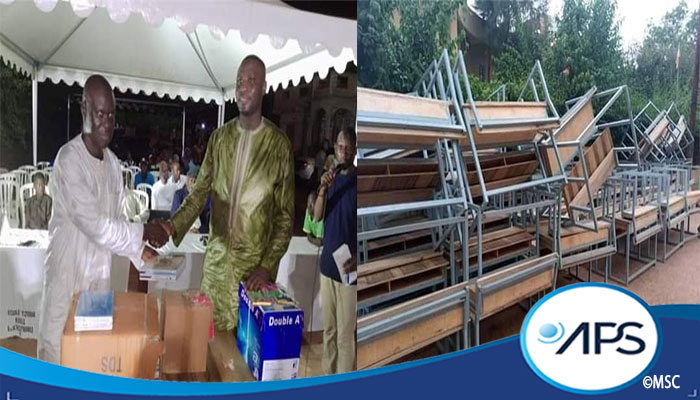 The mayor of Khombole took advantage of the traditional delivery of school supplies, Saturday evening in front of the town hall, to distribute, for the first time, tables-benches to the seven public schools of the town.

"The demand is very high, but gradually, we will reduce the gap in tables-benches," said Serigne Mbacké Hann, chairman of the finance committee of the Khombole town hall, who presided over the ceremony of delivery of this school equipment.
According to him, the municipal team has released an envelope of 10 million CFA francs for the purchase of this school furniture, which is lacking in the schools of the town.
This approach, he said, is in line with the willingness of the Head of State to support local artisans through the public order.
Seven million have been spent this year for the purchase of school supplies, bringing to 58 million CFA francs, the amounts injected into this heading since 2014 by the current municipal team, he told APS.
If the school kits are intended for public and private students, the bench tables are reserved for public schools only.
Papa Diallo, on behalf of parents' associations, welcomed this gesture of the local authority which "removed a thorn from the side" of parents.
This endowment will allow schools to start classes early, he added.
The mayor's office has, at the same time, given grants to sports and cultural associations (ASC) of the town.
The ceremony was also an opportunity to honor Massamba Ndiaye, a son of Khombole, African champion of deaf-mute football.
Asked about the projects of the town hall, Mr. Hann mentioned the rehabilitation of the stadium of Khombole, which is in an advanced state of disrepair.
The 25 million CFA francs included in the 2021 budget being "insufficient", according to him, other contributions are expected from the departmental council which has announced an envelope ofThe 25 million CFA francs included in the 2021 budget are "insufficient", according to him, and other contributions are expected from the departmental council, which has announced an envelope, and from the Minister of the Interior, a native of Khombole, who had sent a team of technicians for preliminary studies.
Around a table, all these contributions will be "updated, to see in what conditions to rehabilitate the stadium".
Mr. Hann said he hoped that the necessary funding for the rehabilitation of the stadium will be found.
The completion of the socio-collective center, and the rehabilitation of 10 km of urban roads are also among the "major projects" of the mayor.
The municipality is also working on the construction of a second CEM in Khombole, for which it has already deliberated on the allocation of a site.