Since October 14, 2021, the day of the celebration of the world day of standardization, the standards of the soybean sector are approved in Benin by the National Council of Standardization of Metrology and Quality Management. During two days and on the occasion of the session held in the city of Bohicon, the members of this council have combed the four fundamental standards which are: soybean seed, soybean grain, soybean milk and soybean cheese. 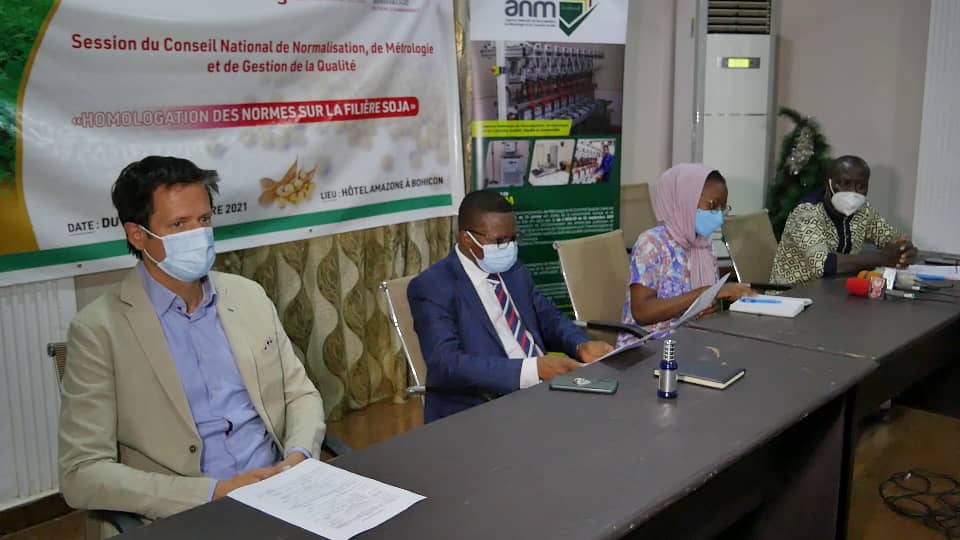 After validation by the sectoral technical committee for standardization "agricultural products and foodstuffs", the members of the CNMGQ from the private and public sectors, all specialties included, held very rich scientific and technical discussions to reach a consensus that led to the approval of these four standards at the end of a long process. All this was done with the technical assistance of the German cooperation agency GIZ and the PTB (German National Metrology Institute) through the Project to Strengthen the Quality Infrastructure for the Soybean Sector (ProQUAL).

This project, which aims to improve the conditions necessary for the consolidation of quality in the soybean sector, focuses on expanding the services of the quality infrastructure structures. This objective was recalled during the opening ceremony by Hiba YACOUB and Daniel Lambart, respectively representatives of the GIZ and the PTB. The two partners expressed their total satisfaction for the involvement and mobilization of the actors of the sector, but especially for the coordination of quality ensured by the National Agency of Standardization of Metrology and Quality Control (ANM). The representative of the Directorate of Programming and Forecasting of the Ministry of Agriculture, Livestock and Fisheries, Anicet KPANOU also expressed the satisfaction of his administration for the successful outcome of this process.

Mr. Gabin Joseph DEGBEY, Director General of the ANM, in opening the Council, first recalled the role of the said Council, and then the inclusion in the standards of the requirements of soybean consuming countries, including China. He also sincerely thanked the GIZ and the PTB for their ongoing assistance. It should be noted that at the start of the session, which was supervised by Ernest GBAGUIDI, Chairman of the Sectoral Technical Committee on Standardization of Agricultural Products and FoodstuffsDassouki ISSIFOU SIDI, Director of Standardization and Promotion of Quality Infrastructure, made a presentation on the standardization process. He reminded members of the methodology adopted for the development and finalization of the said standards.

One of the recommendations resulting from this Council remains the sensitization and popularization of these standards to facilitate their appropriation and implementation. The various partners expressed their support for this concern.

It should be noted that the financing of this entire process is provided by the German Federal Ministry for Economic Cooperation and Development.