Gabon/Female cancers: "Pink October" invites itself to the markets of Libreville

To fight against female cancers and allow women traders to be screened in their work space, the mayor of Libreville has launched a screening campaign for female cancers in the markets of the Gabonese capital. Until October 31, the dedicated points will receive up to 50 women per day. 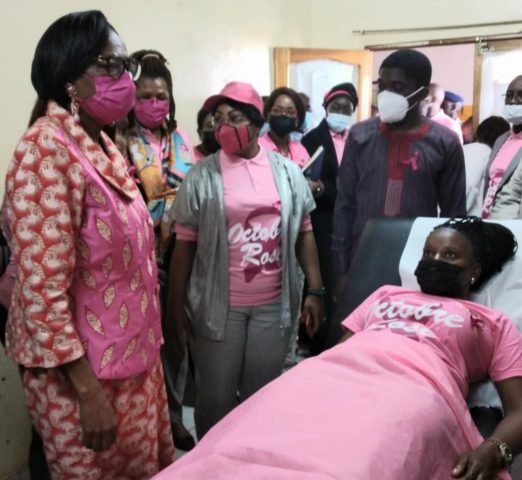 Early detection of cancer, say cancer organizations, not only reduces the costs of treatment, but also allows people to continue working to support their families. It also saves lives. Certain of this, in this month of October dedicated to the fight against women's cancers, the mayor of Libreville went to different markets of the Gabonese capital to officially launch in these places where hundreds of traders "live". "In these places where hundreds of shopkeepers live and where thousands of women follow one another, the Pink October campaign for awareness and screening of female cancers was officially launched.

From the Oloumi market to that of Mont-Bouët through the Akébé market, Christine Mba Ndutum, accompanied by her deputies and the mayors of the city, launched the campaign.Christine Mba Ndutum, who was accompanied by her deputies and the mayors of the districts concerned, urged women traders to get screened to continue to carry out their activities serenely. "Get screened because screening is a good reflex that can save our lives," advised the mayor declining the occasion, the theme chosen for the 2021 edition of the Pink October campaign in the country. The screening structures installed in the markets, said Dr. Audrey Diundu in charge of supervising this campaign, will receive a maximum of 50 women per day.

According to her, the objective is to screen as many women traders as possible in order to detect and report emergency cases of breast or uterine cancer. The campaign began on October 14 in the markets and will continue until the end of October. Psychologists and health personnel from the Ministry of Health and City Hall are deployed at the various sites selected for better care of people who will be screened. "As there are screening points here at the market, we won't have to travel. It makes it easier for us," said a shopkeeper.