Burkina Faso/Emergency development programme: The NGO Terre des hommes and its partners consult each other

The NGO Terre des hommes Lausanne, with the support of the European Union, presented the Emergency Development Programme (UDP) to the state authorities and other stakeholders in Burkina Faso. This was to facilitate its effective implementation. It was during a workshop organized on Thursday, October 14, 2021 in Ouagadougou that the program was scrutinized under the leadership of the coordinator of the UDP interconsortia unit, Pierre Fichter, the technical adviser of the Ministry of Territorial Administration and Decentralization, Ambroise Somé and the head of the EU cooperation, Pilas Palnieso. 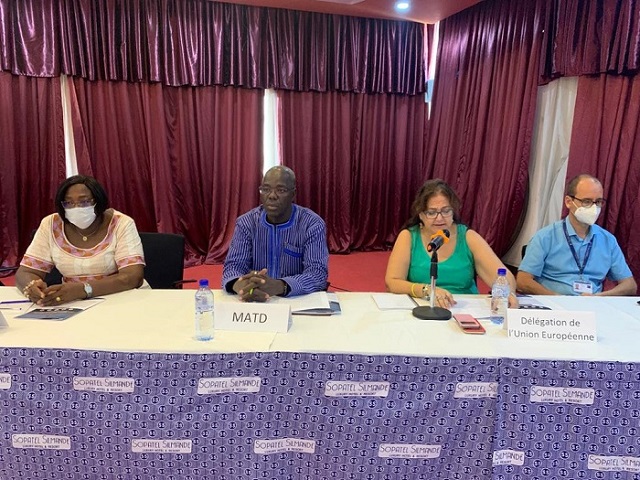 It is a programme that intervenes in the geographical area in which insecurity has the greatest impact on the population in all aspects of their lives. These include access to basic services, the economy and the possibility of grouping together to have "normal" social relations. The areas concerned are, among others, the Boucle du Mouhoun, the North, the Sahel and the East where some people have had to flee and find themselves internally displaced on the outskirts of towns such as Kaya, Dori or Djibo.

The programme, in its specificity, intends to achieve objectives in terms of inclusion for stability, access to basic services, resilience, social cohesion, local governance and decentralisation. According to the Head of Cooperation of the EU Delegation in Burkina, Pilas Palnieso, the institution is truly a faithful partner in Burkina Faso, especially in a period of security crisis.

For her, it is a fundamental program that falls within the broader framework of EU interventions to support the population. She said it is difficult to reach certain areas because of insecurity where people are alone. She added that this multisectoral program has an approach adapted to the needs of each region. "Our expectation is that the population will find a normal life despite the security situation. We accompany the government's efforts in this direction," she said.

The technical adviser to the Minister of Territorial Administration, Ambroise Somé, said that the territories affected by these crises are under particularly strong constraints that require the strengthening of resilience mechanisms within communities.

"He said the UDP is timely in complementing the efforts of state actors in these so-called crisis areas. We must rely on good cooperation with all actors at the local level."
The coordinator of the UDP Inter-Consortia Unit, Pierre Fichter, explained that it has been a year since the programme started under difficult conditions.

This is explained by the fact that access to the intervention areas was complicated. The large-scale movements of internally displaced persons have also forced the programme's partners to adapt their intervention to help the population. Nevertheless, the programme has enabled more than 10,000 people to receive financial assistance to cope with this situation. 8,000 children suffering from severe malnutrition have been supported. In addition, two houses of justice have been built in Diapaga and in the Boucle du Mouhoun.

In short, more than 40% of the country's internally displaced persons are located in the project's intervention zones. Thus, to respond to this situation, the PDU deploys a multisectoral intervention in order to impact the improvement of the living conditions of vulnerable populations.