On the occasion of World Resuscitation Day, the Liege municipal authorities inaugurated the first of 35 cardiac defibrillators to be installed in the Cité Ardente at the Galeries Saint Lambert in Liege. For the occasion, dummies allowing the public to learn resuscitation were available and the public was not too eager to try the exercise. 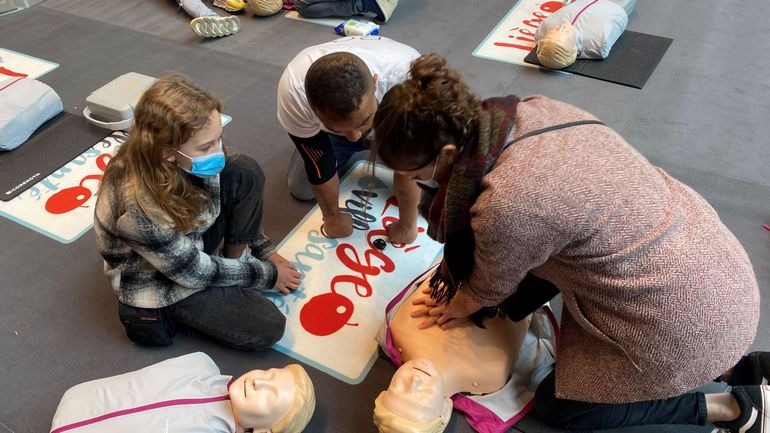 The portable cardiac defibrillator saves lives, but you have to be able to use it: "In Belgium, there are 10,000 cardiac arrests per year and only 800 to 900 will survive. Our colleagues in the Scandinavian countries have a survival rate of up to 40 percent. Where is the problem? The ambulance or the smur arrives on average within ten minutes. But we know that every minute without resuscitation after a cardiac arrest leads to a loss of 10 percent of the chance of survival. In Scandinavian countries, they train young people in resuscitation", says Jacques Delchef, vice-president of the Belgian Resuscitation Council.

Many candidates tried their hand at these demonstrations. Among them, Céline and Elisa: "In the massage phase, it's quite physical and you have to be able to hold on," says Céline. "The fact that the device guides as you go along is a help because you can forget quickly with the fear and the emotions, so it is reassuring. I think that we never feel ready to do it until the moment it happens, but when it happens there is no choice so I will be, I hope," says Elisa.

In Liege, 35 defibrillators will soon be available 24 hours a day in public places.