Benin/Tourism, hotel and catering training and regulatory reform: The steering and technical monitoring bodies have been installed

In continuation of the large-scale actions methodically carried out since 2016, with a view to aligning Benin with international norms and standards in tourism, Minister Jean-Michel ABIMBOLA proceeded to set up the Steering Committees and Technical Committees for the monitoring of tourism, hotel and restaurant training projects and the reform of the regulation of the tourism sector in Benin. 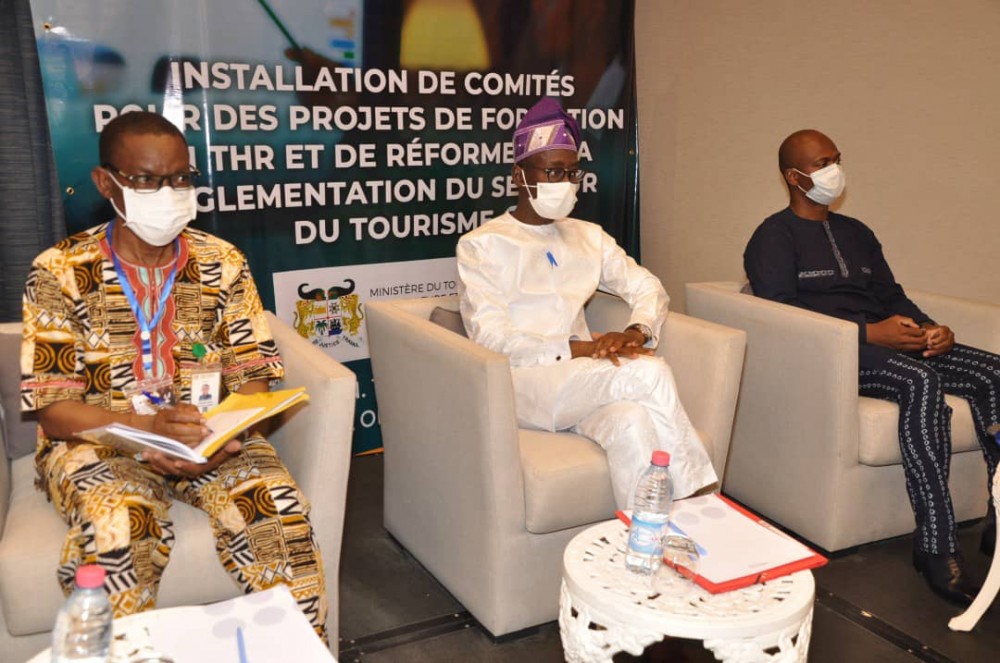 The installation ceremony of the said bodies took place on Friday, October 15, 2021, at Novotel Orisha Cotonou, in the presence of the representative of the Minister of Secondary and Technical Education and Vocational Training, the Director of the National Agency for Heritage Promotion and Tourism Development (ANPT), Edmond TOLI, the Director of Tourism Development (DDT), Yaya MORA BROUTANIvelopment of Tourism (DDT), Yaya MORA BROUTANI, the Consultants of the World Tourism Organization (WTO) present in Benin within the framework of the project of capacity building of 54 tourist guides andThe meeting was attended by the Director of Tourism Development (DDT), Yaya MORA BROUTANI, consultants from the World Tourism Organization (WTO) who were in Benin as part of the project to strengthen the capacities of 54 tourist guides and reform the system for granting approvals, licences and classifications to tourist enterprises, as well as representatives of the sector's apex organizations.

In his welcoming speech, Mr Yaya MORA BROUTANI recalled the context in which these two major projects are taking place. According to his words, this installation comes after the exchange meeting between the Minister and the actors of tourism last June on the relevance of the reforms initiated in the sector. This led to a massive adhesion to the reform of the regulation of the tourism sector. This is evidenced by the numerous applications for approval which are being studied by the National Commission for the Approval of Tourist Establishments (CNAET).

"(...) The positioning of our country as a major tourist destination passes indeed, not only by the construction of infrastructures, the development of our sites, but also and especially by the global quality of the service which we will offer to the visiting customers once these building sites will be completed.
This is why, very early on, the issues of standards, regulations, training and capacity building of personnel in this sector appeared preThe Minister of Tourism, Culture and Arts said that the issues of standards, regulations, training and capacity building of staff in this sector were very important to the government and were the subject of reflections and pleas, one of the fruits of which is the ceremony which brings us together today. He thus expressed the government's gratitude to the partners, particularly the World Bank for its contribution to the implementation process of the Competitiveness and Cross-Border Tourism Project (CCTP) and to the UNWTO for its technical support through the signing of various conventions.

While recognizing the quality of the members of these bodies, Minister ABIMBOLA insisted on the quality of the work expected from them. For some of them, it is a question of supervising the different processes and for others, of proposing concrete measures for the operationalization and monitoring-evaluation of each process.

It should be noted that the work of the various committees will lead to the updating of the texts regulating the sector, the proposal of new texts to better respond to the current realities of the sector, the automation of the process of issuing approvals and operating licenses and capacity building of public and private actors.