The African Centre of Excellence in Biotechnology Innovations for the Elimination of Vector-borne Diseases (CEA/ITECH-MTV), in partnership with Nazi Boni University, is organizing a short professional training in innovations in the fight against vector-borne diseases at the Training and Research Centre of Nazi Boni University from 12 to 17 July 2021 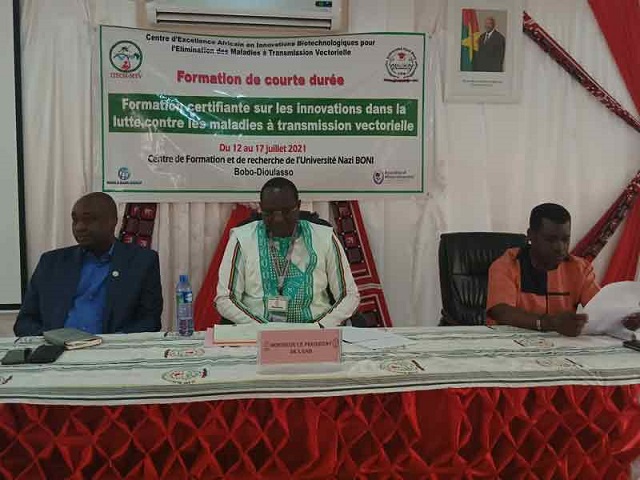 Prof. Macaire Ouédraogo, President of Nazi Boni University and chairman of the ceremony, opened the proceedings on Monday 12 July 2021.
The training brings together about sixty participants composed of master students, doctoral students and doctors, 18 of whom come from the sub-region of Africa. Participants from Northern countries will also participate by videoconference in the training.

Also, 20 trainers with Ibrahim Sangaré, Associate Professor, as the main investigator, will provide this training during these six days.
The African Centre of Excellence in Biotechnology Innovations for Vector-borne Diseases Elimination (CEA/ITECH-MTV) is a centre focusing on innovative biotechnologies for the elimination of vector-borne diseases. The African Centre of Excellence in Innovative Biotechnology for Vector-Borne Diseases (CEA/ITECH-MTV) is a centre for innovative biotechnology in the field of vector control created to provide an important pool of disease vector specialists through a quality training program supported by an efficient research program.

The centre's activities are focused on five action plans: Management and governance at the CEA; excellence in academic training; excellence in scientific research; scientific and sectoral/industrial partnerships and finally regional attractiveness with an equity dimension within the CEA.

The importance of training

According to Dr. Abdoulaye Diabaté, Director of the African Centre of Excellence in Biotechnological Innovations for the Elimination of Vector-borne Diseases (CEA/ITECH-MTV), the interest of the training stems from the context of the creation of the centre focused on vector-borne diseases. With the health problems linked to these vector-borne diseases, malaria in particular, statistics reveal a fairly high mortality rate and relatively higher in Burkina, despite some prevention tools.

It is in this sense that the international community is now calling on scientists to put in place innovative processes that will strengthen the system. But for this, the necessary personnel and expertise are needed. This is what justifies this training which is in its fourth edition, the first having taken place in 2019 to enable the country to have the necessary capital.