The Head of State, Macky Sall, on a visit Saturday in the department of Louga (north) proceeded in the afternoon to the inauguration of a third drinking water treatment plant in Keur Momar Sarr, a locality located about fifty kilometers from the regional capital. 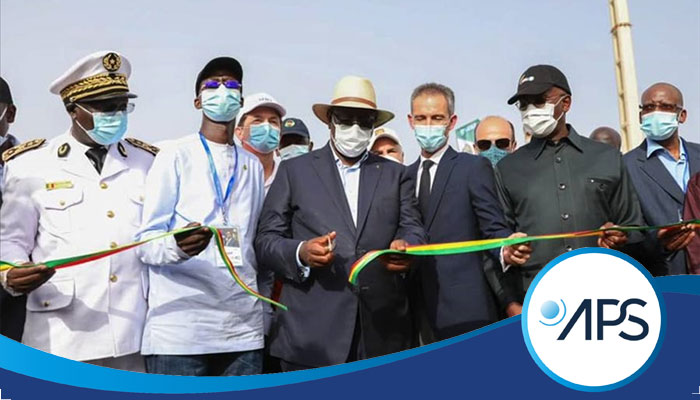 The French ambassador to Senegal, Philippe Lalliot, the minister in charge of water and sanitation, Serigne Mbaye Thiam, and the mayor of Keur Momar Sarr were also present. As well as the director of the company Sen Eau, Jany Arnal and the general manager of the Société nationale d'exploitation des eaux du Sénégal (SONES), Charles Fall.
The work of this plant had been launched in April 2018 in Fandène (Thies), by President Sall. The new plant is considered by its designers as the largest hydraulic work ever built in Senegal.
The erection of the infrastructure, piloted by the Ministry of Water and Sanitation through SONES, is part of the priority actions of the Ministry of Water and Sanitation.The construction of the infrastructure, piloted by the Ministry of Hydraulics and Sanitation through SONES, is part of the priority actions of the Emerging Senegal Plan (PSE), the national development strategy of Senegal.
KMS3, with a 216 km water pipeline, is located in a locality on the shores of Lake Guiers in the Louga region, from which most of the running water for Dakar and certain urban areas is drawn.
The new plant, which required financing of 284 billion CFA francs, is part of "the response to a demand that is skyrocketing due to population growth and the construction of new urban centres (...)". It will "increase water production in the Dakar region by 50%".
It will produce 100,000 m3 of water per day, i.e. 100 million litres of water per day during its first phase, then 200.000 m3 of water/day in the second phase, in order to improve the quality of water for one million people and its availability 24 hours a day in households.
Its objective is to secure the drinking water supply of the Dakar area as well as the new urban centres of Diamniadio and Lake Rose, and the Diass airport area.
The project also targets Thiès, the Petite-Côte and localities crossed by the pipeline and located in the Louga, Kébémer, Ndande, Pire, Mékhé, Tivaouane, Thiès and Rufisque areas.
On April 28, the plant began injecting the first 100,000 m3 into the network, which has significantly improved water distribution in Dakar and its suburbs.
The first 100,000 m3 are in the network and delivered to consumers who, since May 2, feel a clear improvement in the availability of water," said recently the Head of State Macky Sall on his Facebook page.
President Sall said that "the government is firmly committed to completing the work to inject the second 100,000 m3 of KMS3 and the construction of the desalination plant which will provide 50,000 m3 in its first phase".
For the project manager, Babou Ngom, the plant is currently injecting a volume of water that exceeds the needs of the population.
"We are obliged to stop certain productions such as drilling. For the 200,000 m3 of water to arrive in Dakar, we need another work, a suppressor (to be built in 2022) at Mékhé (Thies) to evacuate all this production in Dakar," he said.