According to a report published a few weeks ago by the British satellite telephone giant Inmarsat, the adoption of technologies related to the Internet of Things has accelerated worldwide, because of the Covid-19 pandemic. But in Africa, the agricultural world has not waited for a global health disaster to begin adopting this new concept and related technologies. Let's decipher. 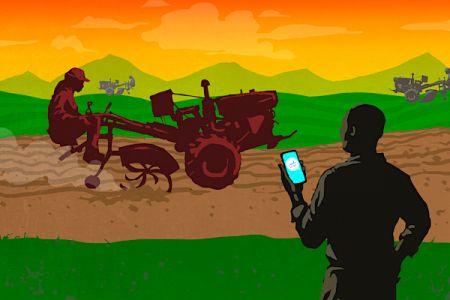 Unlike artificial intelligence or machine learning, it is difficult to have an exhaustive but simple definition of the Internet of Things (IoT), because it is simply not a technology. Rather, it should be understood as a concept that aims to take advantage of the data emitted by the multitude of connected objects, used in all sectors of activity. Thanks to the internet and networking, these connected objects, equipped with sensors, can continuously transmit information to each other and allow users to improve production processes or the daily lives of individuals.

It should also be noted that the IoT integrates the other technologies mentioned, namely AI, machine learning and blockchain. For the moment, the uses of IoT known to the general public are sometimes limited to connected watches, connected cars or the connected home. But IoT applications for businesses are the ones that still offer the most growth potential, because of the needs they can meet.

Agriculture in Africa in the IoT era

According to the UN, the world needs to double its food production by 2050, to meet the expected high population growth. As arable land shrinks and climate change affects the availability of water, the leitmotif of the agricultural industry is now efficiency. Various technological innovations offer a solution to this quest for efficiency, and African farmers, the continent most affected by this demographic boom, are already seizing it.

As arable land shrinks and climate change affects water availability, the leitmotif of the agricultural industry is efficiency.

In several African countries, agriculture is one of the main contributors to wealth creation and the sector's share of Africa's GDP is estimated at 30%. It also employs 60% of the working population, while producing 80% of the continent's food needs. After gradually migrating from less industrialized farming methods to mechanization and the intensive use of agricultural inputs and pesticides, the continent's farmers can now take advantage of new technologies adapted to their activity. Between the use of chemicals and the effects of climate change, traditional agriculture is facing multiple challenges that are reducing harvests and increasing malnutrition. According to concordant estimates, Africa's population, already marked in part by problems of drought and hunger, is expected to grow by 91% by 2050, from 1.3 billion in 2020 to 2.6 billion.

To address these challenges, several start-ups are trying to provide solutions by leveraging technology to improve the performance of agricultural businesses. In this context, the internet of things plays a leading role, as demonstrated by an agreement two years ago between IBM and agritech Hello Tractor, which operates in Nigeria and Kenya. At the end of December 2018, the American giant indeed partnered, through its subsidiary IBM Research, with the West African startup to develop a platform based in particular on AI and blockchain, for the benefit of African farmers. The method is rather simple. It involves installing connected objects equipped with sensors in the fields throughout the year, so that they can collect and transmit data on rainfall, plant predators, input use, etc.

The method is fairly simple. It involves installing connected objects equipped with sensors in the fields throughout the year, so that they can collect and transmit data on rainfall, plant predators, input use, etc. This information, combined with that obtained through the use of the sensors, can be used to monitor the crop's growth.

This information, combined with that obtained from the weather and analysed using artificial intelligence and machine learning, then provides farmers with valuable information. These can include the ideal time to plant, protect crops with pesticides, and irrigate, in order to obtain the best possible yields.

The other aspect that may go unnoticed, but is equally valuable in digitized agriculture, is the availability of reliable crop data, which can encourage lending institutions to more easily provide financing to agricultural entrepreneurs.

In addition, sensors can also be installed on farm machinery, alerting owners to potential repairs or maintenance work that needs to be done. This limits unforeseen events and also helps to improve crop yields. Finally, another aspect that may go unnoticed, but is equally valuable in digitized agriculture, is the availability of reliable crop data, which can encourage lending institutions to more easily provide financing to agricultural entrepreneurs.

It is important to note that agritech is not unique to Africa. In its report entitled "Industrial IoT in the time of Covid-19", prepared with the support of the firm Vanson Bourne, Inmarsat recalls that "investment in technologies to support food production has increased sixfold since 2012, reaching $20 billion in 2019." Of this total, it should be noted that technologies focused on genetic improvement of crops or precision agriculture occupy a good place. Moreover, across the world, the companies that are more likely to make the necessary investments are the large ones (250 to 3000 employees and more). In Africa, where small and medium-sized enterprises still dominate the sector, the problem of financing this new technological revolution arises.

In Africa, where small and medium-sized enterprises still dominate the sector, the problem of financing for this new technological revolution arises.

To this, we must add an equally important problem concerning the digital divide. Agriculture is practised in rural areas and unfortunately these are still the regions most neglected by operators as far as Internet access is concerned. The mobile internet penetration rate is 28% in sub-Saharan Africa, according to the 2020 figures of the Global System Operators' Association (GSMA). The cost of the internet is also a barrier, as is the availability of skilled labour to exploit the data, and the need to train farmers to use the technology. Fortunately, these are not insurmountable difficulties and a strong political will can help democratize the use of the Internet of Things in African agriculture.