The structure of states, which distributes the exercise of political power over their national territories, varies greatly from one European country to another. While there is a general trend towards decentralisation, federal models remain the exception within the Union. 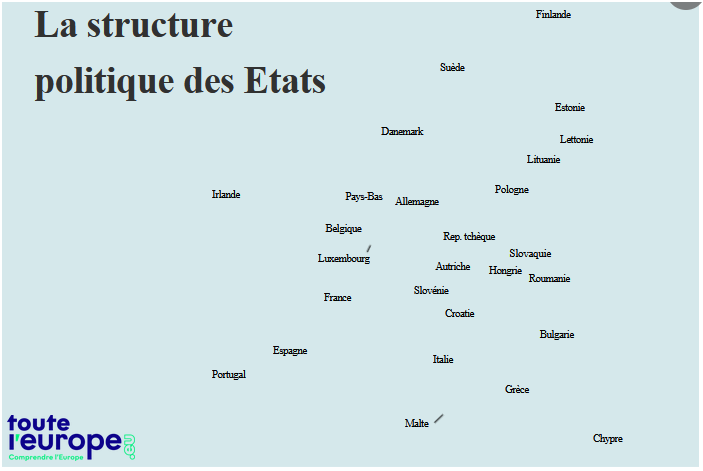 The unitary state, the most common form in Europe, Africa and Asia, is generally characterised by territorial and political unity. It is governed by a single central authority, which concentrates the vast majority, if not all, of state powers and exercises them uniformly throughout the national territory. The unity of a State does not prevent a certain level of deconcentration (existence of authorities delocalized from the central State, such as the prefects in France), or decentralization. In the latter case, the representatives of the decentralised units (such as the French regions, departments or communes) are elected locally and manage and administer public services under the supervision of the State. However, they have only those competences that have been attributed to them by the central state, and do not exercise legislative power.

The confederation, a special case

A confederation is made up of independent entities that form an alliance but, unlike the federal model, do not give up their own sovereignty.

Since the notion of statehood is now largely conditioned by the idea of a single international representation, none of the internationally recognised states is organised in a confederal manner: the political systems that come closest to confederations are the international organizations (UN, Commonwealth, Benelux...).

In Europe, the historical model of the unitary state, more or less centralised, remains dominant: only three EU member states are federal states (Germany, Austria and Belgium). Spain and Italy (and, outside the EU, the United Kingdom) can be considered as regional states.

The presence of several nations within a single state also favours federalism or decentralisation. This is the case in Belgium, which is divided between Flemish and Walloons (Brussels being the third federated entity), or in the United Kingdom, where the Scottish, Welsh and Northern Irish nations obtained devolved governments in the late 1990s. Spain, finally, has promoted the autonomy of its communities in response to Basque and Catalan nationalist demands.

While European states remain free to choose their political organisation, European integration has been accompanied by a trend towards decentralisation. The principle of subsidiarity, enshrined in the Maastricht Treaty, favours local decision-making if the higher levels of government do not prove more efficient. Moreover, the cosmopolitan aspect of European construction has proved to be a fertile ground for nationalist demands and regionalist movements, pushing states to confer more autonomy on their regions.

Is the European Union a federal state?

Neither truly confederal nor truly federal, the EU is a hybrid or sui generis organisation ("of its own kind" in Latin)

In many respects, the structure of the European Union approaches a federal model. It has "central" institutions, with executive, legislative and judicial powers. Its treaties can be likened to a constitution, and European law, which takes precedence over national law, applies directly to European citizens. Legislative power within the Union is divided between several levels, and the states share sovereignty with it.

However, the exclusive competences of the EU (competition, international trade, monetary policy, etc.) are limited, essentially economic (the States retain their sovereignty in the main areas of sovereignty), and emanate from the Member States. Moreover, the European Union is not recognised as a federal state by any other state, and has no single international representation. Finally, the member states have the possibility of regaining their sovereignty at any time by withdrawing from the EU.