French Polynesia/Taravao: The government on the employment and health front

The President of French Polynesia and several ministers were received in Taravao on Thursday, October 14, 2021, by elected officials from East Taiarapu, including the mayor, Anthony Jamet, but also from neighbouring communes. 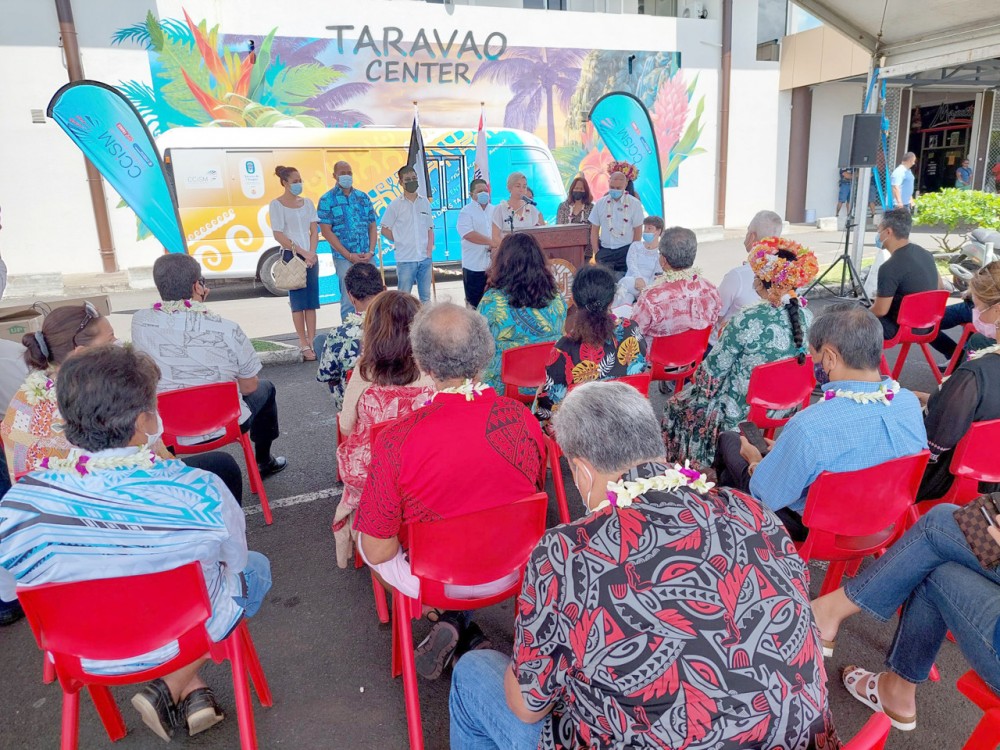 A bus to fight the battle

But why set up this project on the Presqu'île? The president of the country answered this question in his speech.

"It was important that the launch of this mobile bus be done here, in Taiarapu, where the employment pool is smaller than in the urban area, but where the potential for economic development around the blue economy, the green economy, but also tourism is important, and we must support it together. (...) Only 4.4% of job offers in Tahiti concern the rural area, while 34.9% of job seekers reside there," said Edouard Fritch, saying he was leading "a battle for employment.

The schedule of the bus tours will be available via the Facebook pages of the Employment Service and the CCISM.

The President of the country underlined the exemplary "rigour, involvement, technicality and solidarity" of these trainees, who were each presented with a letter of thanks from the government. On this occasion, nine of them also received their professional title, after 24 weeks of training.

At Teaputa Park, the government had a meeting with the 30 health guides of East Taiarapu, who were also widely praised for their work in the field.

"Your mission is not over," stressed Edouard Fritch, referring to the need to continue the vaccination campaign in view of the prospect of a fourth wave. Since the beginning of August, the communal site has been converted into a permanent test and vaccinodrome.

"A total of 1,702 people have been tested and 2,489 vaccinated," said East Taiarapu Mayor Anthony Jamet, who also expressed his desire to host the fourth wave of vaccination.He also expressed the wish to accommodate a tourist information kiosk and administrative services in the vacant premises. On site, the health partnership between the commune, the Pays and the Louis Malardé Institute should be renewed until the end of the year. At present, around twenty screenings are carried out there every day, as well as around fifty injections.

Benin/Raphaël Akotègnon opens the review of decentralization and local governance

France/Lorient Agglomeration: a territory committed to a responsible digital approach

Cameroon/Commune of Bangangté: 10 billion for a mini hydroelectric dam of 5MW